This is the story of how I got paid to travel across Canada for five months with my boyfriend.

In April 2015, I was browsing Facebook when I came across this video.

In case you don’t want to watch it, it’s a contest announcement for a camping brand called Woods Canada. The video says that they’re looking for two outdoor loving Canadians to adventure across the Trans Canada Trail for the summer – and get paid to do it.

I remember going over to the couch and showing Cedric. He thought it looked cool, but he thought we probably wouldn’t win because so many people would apply.

Now, I am someone who LOVES winning contests. I actually win many contests and my secret to winning contests is this: enter them. Most people are lazy and will not bother entering, especially if it requires any form of effort. The Woods Canada contest required you to make a video, and I knew that was beyond most people’s effort threshold.

We decided to make a video and not tell anybody that we were applying. We filmed a short but sweet (and terribly lit) video outlining why we thought we would be great Woods Explorers.

In the days after we submitted our video, the competition exploded. It went totally viral. It was all over social media and regular media. Other people were uploading their videos to YouTube, and they were seriously good. In total, about 3,800 people applied – so much for people being too lazy to make a video.

Suddenly, we looked like total amateurs and I realized we probably didn’t have a shot at winning after all.

So imagine my surprise when I found out we had made it to the next round. The next round involved a ton of paperwork. We weren’t there yet, but we were a step closer.

A few days later, we found out we’d made it one round further: the Skype interview.

We had no idea how many people had made it this far (I’m still not sure how many people did), but adrenaline was running high. This would be our chance to wow them “in person”. I was all over the place: one minute, I would be totally confident that they would love us; the next, I’d be worried that we weren’t what they were looking for.

I can’t remember much from the Skype interview except that it was awkward to try to fit both of our heads in the frame. At one point, we discussed how many social media followers we had. I had no idea about my personal count, but I knew it was unimpressive – somewhere in the low hundreds. Cedric didn’t even had Instagram or Twitter.

After the interview ended, I had a feeling we probably wouldn’t make it to the next round. I knew, from watching other people’s applications on YouTube, that we were up against people with serious social media clout. My measly 130 Twitter followers paled in comparison to the girl who had 50,000 Facebook fans.

Lo and behold, only a few days later, we learned we’d made the final round: interviews in Toronto.

We found out that we would be flown to Toronto, where the selection process would continue. We were stoked to get a free trip to Toronto – with free food and a free hotel room, no less. We went out for at Araxi to celebrate.

This is the photo they released when they announced the top 10.

To maintain our sanity in the days leading up to Toronto, we settled on this philosophy: we would take the process seriously and do everything in our power to be prepared, but we wouldn’t take the experience seriously and would do our best to enjoy every minute of them.

Our reasoning was that the Woods Canada people already knew what kind of person they wanted, and we either were that or we weren’t. We could probably fake it for a week, but we couldn’t fake it for five months. We’d be ourselves, and if they were looking for a couple like us – great. If not, who cares – we were staying a free hotel!

The Toronto trip was surreal. It was bizarre meeting the other top 10 contestants face-to-face. 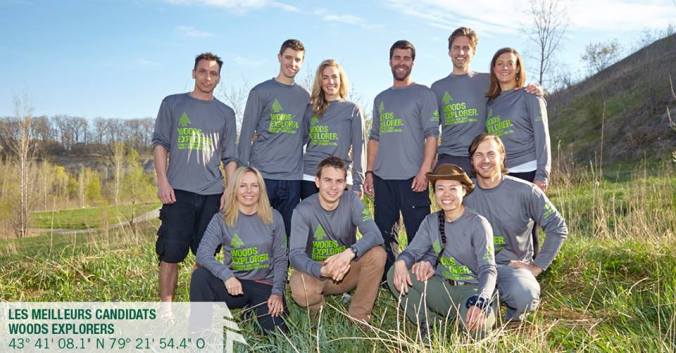 Oddly enough, Cedric already knew one of them – he’d worked with Peter before in Whistler. Unfortunately, he only had great things to say about Peter, so it was hard not to like him. Another couple in the top 10, Kelsey and Sarah, reminded me of us – only they appeared to be superior in every measurable way. They were better travelled, more experienced, more charismatic, and far more adept at photos and videos than we were. I thought for sure they had it in the bag.

A third couple, Adam and Melba, had larger than life personalities. They were expressive, engaging, and down to earth. Melba oozed passion and energy, and Adam was hilarious and very candid. I thought that they, by far, would provide Woods with the most entertaining and compelling content.

The contest wasn’t just open to pairs – you could apply as individuals, too, with the possibility of getting matched up with another solo applicant if you won (like Peter had done). There were four solo applicants in the top ten. I recognized Calixte from one of the videos I’d seen on YouTube – his was unforgettable because it was super hardcore, with gnarly ice climbing footage. Fresh out of business school, Calixte was full of ideas. He didn’t just seem ready to be a Woods Explorer – he seemed ready to be CEO of Woods Canada.

Callan was another competitor, one who was easy to underestimate at first. He was the youngest, he lived in a big city, and he wasn’t very loud. But we quickly discovered that there was a lot more to Callan than meets the eye: not only had he paddled the Mackenzie River and been on all kinds of adventures, but he was also a professional photographer – in other words, he was perfect for the gig. He was also very well spoken, kind, and smart.

Finally, the last contestant to arrive was Shauna. She was confident, easygoing, and possibly had more outdoor experience than the nine of us combined.

In short, the competition was stacked. I felt totally out of my element – like we’d somehow tricked them into letting us into the Top 10. We seemed so average and quiet compared to the rest of the crew.

I kind of wanted to hate them  – after all, they were the competition – but everyone was so darned friendly that it was impossible not to like them.

I won’t go into detail about what went on in Toronto (I signed too many non disclosure agreements to know what I am/am not allowed to say), but Cedric and I were on our A-game and did the best we could, all while enjoying every second of the experience.

On our second evening, the top ten were whittled down to a top six – and we made the cut.

This was part of the mystery skill testing stuff we had to do in the Top 10.

It was bittersweet – we were stoked to still be in the running, but it felt too soon to say goodbye to Kelsey, Sarah, Calixte, and Callan. In fact, we would end up seeing the latter two again – Callan was hired to work the campaign that summer, so we were in touch all the time, and we were able to meet with Calixte and his adorable puppy at his home in Moncton.

The final stages of the competition were a little nerve wracking, but we just kept doing what we’d been doing all along. I remember sitting in a board room with Cedric, Adam and Melba, and Shauna and Peter, and thinking – wow, two of the people in this room will actually be DOING THIS in like, a WEEK!

As it happens, four of the people in that room got picked to be Woods Explorers. As a final twist, they ended up choosing two pairs: Cedric and me, and Adam and Melba. 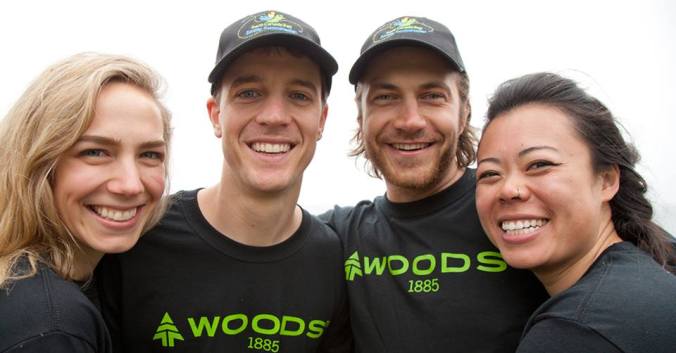 Of course, the official promo photo was taken in the worst humidity and while I was recovering from food poisoning (for real).

Now, let me tell you the honest truth: this entire time, I thought there was no way we would be picked. I’m not saying that to be humble and modest. I sincerely thought we would not make it, so I hadn’t actually considered what it might be like if we did get picked. I was caught completely off guard.

For the first couple of hours, I was excited and in total shock. When that wore off, I started to feel really anxious. We had about 24 hours to organize things at home – quit our jobs, pack our bags, fill prescriptions, clean our house – and that was really overwhelming. I also realized that we wouldn’t get to do the things we had planned for the summer – holidays with our families, weddings of close friends, etc.

I also felt like a total fraud. Despite the fact that we’d been totally transparent the whole time, I still felt like I wasn’t qualified enough for the gig – like I didn’t deserve to be there.

Luckily, Cedric was there to bring me back down to earth. He reminded me that, although we’d be missing out on a lot that summer, we’d be having so many incredible adventures of our own. He was right. I was unprepared, but I really wanted this.

Having Adam and Melba in the same boat as us was invaluable. Sharing the experience with them helped to ease the pressure. It was incredibly helpful to have another pair to reach out to who knew exactly what we were going through, and they would prove to become wonderful friends that summer (and beyond). 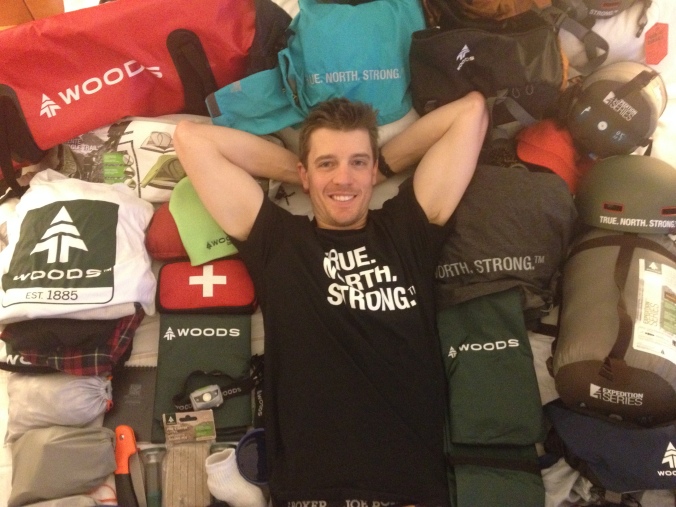 One of the many reasons that being a Woods Explorer was quite awesome.

I’ve recounted my stories from my five months as a Woods Explorer in many places (you can check out the Woods blog, Facebook, and Instagram to see some of those – although you may have to scroll back pretty far, since this was a year and a half ago). Instead of telling the same old stories again, over the next little while, I’m going to discuss something else: our ornaments.

Cedric and I picked up a Christmas ornament in each place that we went, each specifically selected because it reflected a special memory from that leg of the trip.

Playing in the Canadian Tire showroom was a prize in and of itself.