Is there any chocolate chip cookie recipe that doesn’t claim to be the best?

It’s doubtful. But, to be fair, there are a lot of really excellent chocolate chip cookie recipes in this wonderful world of ours. I should know – I’ve baked about a thousand varieties since I’ve known Cedric. Although nobody would argue the fact that I have the sweeter tooth, Cedric’s baked good kryptonite is chocolate chip cookies (and apple crumble – or is it apple crisp? I haven’t tried baking this for him yet, though, because I know it won’t be as good as the one his mom makes!) 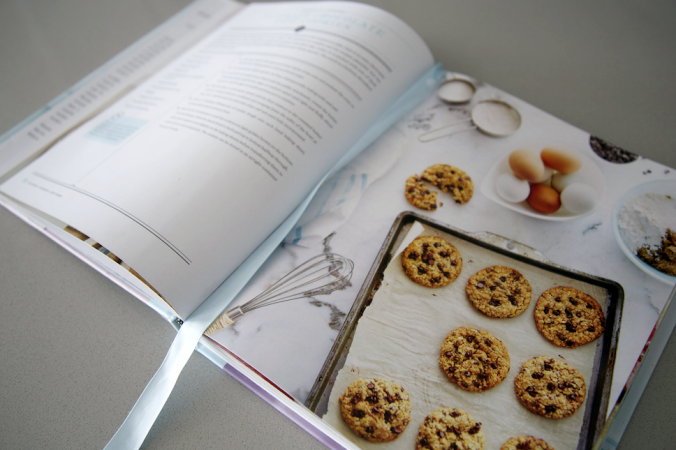 The name is slightly misleading because it omits the fact that this recipe contains two cups of large-flake rolled oats. That’s a substantial amount of oats – enough, I would argue, to rename the recipe Ultimate Chocolate Chip Oatmeal Cookies. At first, I thought Cedric would resist the oat factor (after all, some people are cookie purists). But when I ran the idea by him, he seemed very enthused at the prospect of oats. So I gave it a go.

It’s a very easy recipe with the usual ingredients (all-purpose flour, baking powder, baking soda, salt, room temperature unsalted butter, granulated sugar, brown sugar, egg, vanilla, and chocolate chips) + oats. The only place I tend to get creative is with the chocolate chips. First of all, I disregard the suggested 3/4 cup – I pretty much pour in an entire bag of chocolate chips. As a sage friend once pointed out, “When has anyone ever complained that there are too many chocolate chips?” Fun fact: I never eat the raw dough out of the bowl. I’m annoyingly hygienic about my baking. On the plus side, if you ever eat my baked goods, you know they haven’t been messed with.

We tend to prefer milk chocolate chips, which are tasty but arguably not as aesthetically pleasing as semisweet or dark chocolate chips. Sometimes, I like to mix two kinds together (usually when they have a “buy two for $5” promo at Craig’s).

While we’re on the topic of chocolate chips, by the far the BEST chocolate chips I have ever had are the Ghiradelli chocolate chips. If they have these at your grocery store, buy the entire stock. I haven’t seen them around in a long time, but next time I find them, I’m buying them by the truck load. The Chipit Hershey Kisses chips are also the bomb, and also not available at my grocery store. Sigh. 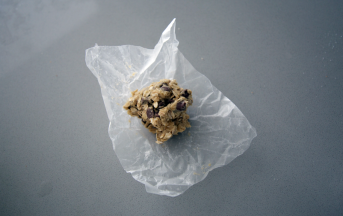 Okay, so here’s my freezing technique: I cut out little squares of wax paper. I drop a dollop of dough onto the square, then I fold up the wax paper and shape it into the shape of a puck. I push down slightly in the middle so that the outside edges are thicker than the centre. This makes it bake more evenly later on (because the middle will take longer to thaw in the oven than the edges).

I reuse the little wax paper squares a few times – just be careful when unwrapping them, and you’ll get a few uses out of them.

Once I’ve wrapped up all my little cookies, I put them in a freezer ziploc bag. When we’re ready to bake, we take a few out of the bag while we preheat the oven. Boom – easy as that.

In our oven, we find 16 minutes to be the perfect amount of time for baking (this is more than the 8 to 12 minutes suggested in the book). If I’m not cooking from the freezer, I still cook them a little longer – about 15 minutes. I like my cookies to be nice and golden – if you prefer them to be super soft and raw in the middle, 8 to 12 minutes is probably more your cup of tea.

So is it really the *ultimate* cookie? It’s definitely up there and it has become one of my two chocolate chip cookie go tos (the other one is this one – a good bet if you’re not feeling the oats). This recipe definitely deserves its place in the Bobbette & Belle cookbook.