If I had to pick a favourite show of all time, it would be Flight of the Conchords. Though there are only two seasons of it in existence (tragic), I have seen each episode at least … six times? Ten times? I’m not sure. A lot of times, anyway.

One of the best songs in one of the best episodes HAS to be Fou du Fafa. (Excuse the terrible quality, but it’s better than nothing.)

So… basically, what I’m getting at is, “Baguette – hon hon hon!” 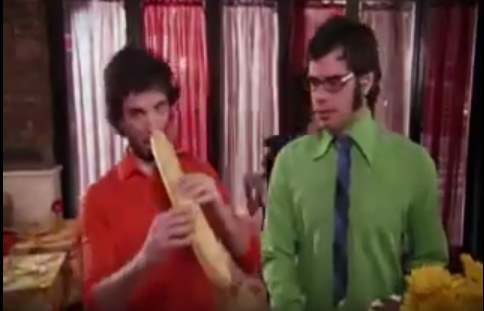 I made the baguettes from my Bread Illustrated cookbook. They were good. Not great, but good.

As the book says, “A great baguette is hard to come by outside of France.” Unfortunately, this is just plain old true. I thought maybe I could give it a stab in my own kitchen, but although my baguettes tasted pretty good, they came nowhere near France bakery quality. And they were straight up homely.

They just kind of remind me of batons, and not in a good way. Plus, the crumb is underwhelming, especially compared to the super holey (think sponge toffee) crumb shown in the cookbook.

So where did I go wrong? I can think of five possible areas for improvement:

This recipe yields four loaves. That seemed excessive for just the two of us, and the recipe states “the baguettes are best eaten within 4 hours of baking”. Although 4 seemed like too much, somehow 2 seemed like a reasonable quantity. And yes, both were eaten within 4 hours of baking. The loaves are definitely on the smaller side – think a large submarine sandwich – so whipping up a full recipe probably wouldn’t hurt, plus it would involve less messing with the quantities. Even though cutting a recipe in half is usually pretty straightforward, you never know if there will be any weird side effects from reducing an ingredient.

Shaping and rising the little torpedoes

This recipe calls for 1 teaspoon of diastatic malt powder – an optional ingredient that I opted to not even ATTEMPT to hunt down. Here’s what they say about this optional ingredient: “We added a little diastatic malt powder to our dough to boost exterior browning and flavor; during the dough’s long refrigeration stay, the yeast consumed nearly all of the available sugars, and the malt powder unlocked more sugar by converting starches in the flour”. I trust the lack of malt powder is what made my baguettes look a little pale and sickly.

(I will reiterate what I told my mom on the phone – no need to send me malt powder, Mom!)

(She recently mailed me some za’atar. I do have the best mom!) 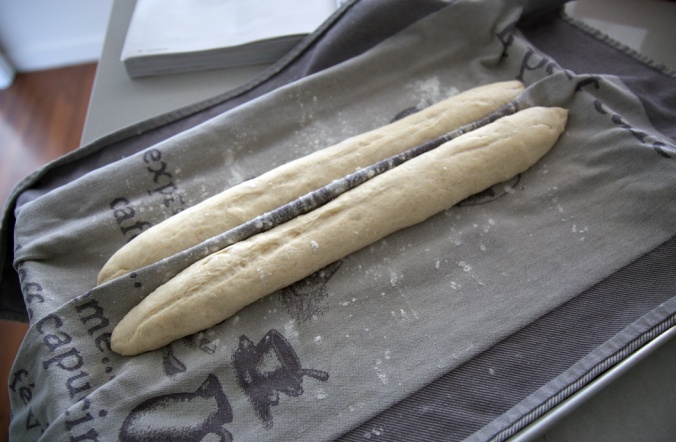 My aunt (a.k.a. my baking mentor) has previously noted that when a recipe calls for, say, 16 to 48 hours in the fridge (as this one does), there will be a difference in leaving it in for only 16 hours versus leaving it in for the entire 48 hours. I left the baguette in for less than 24 hours, and I’m starting to think that long and slow is the way to go for a bubblier crumb and even better taste. Next time, I shall wait longer.

To create a “shatteringly crisp, flavorful crust” (did anyone else read that in Mary Berry’s voice?), the book advises covering the dough with a disposable roasting pan for its first 5 minutes of the oven. I thought I had one of these, but when it came time to bake, I discovered that I, in fact, did not. I tried to improvise with an inverted deep(ish) baking sheet, but I’m not sure if it did the trick. 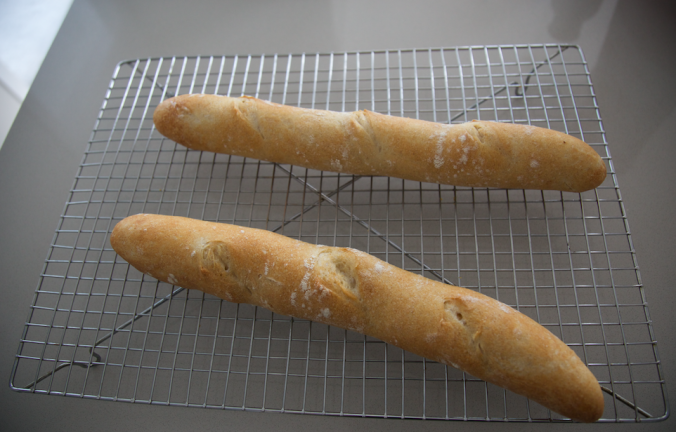 I need to stop being such a shy slasher. Or maybe I need a proper lame. Either way, my pre-bake cuts were NOT deep enough and they resulted in the ugly baton shape. Seriously, they kind of look like those baguettes you buy at the supermarket when they’re partially baked and you finish it off in the oven. Not what I was going for.

Now, despite everything I did wrong, the baguette was still very tasty. It was better than any grocery store baguette, for sure – though probably not as good as the baguette at Tall Tree Bakery here in Squamish or 200 Degrees in Whistler (I haven’t tried the baguettes of either bakery, but I’m pretty confident in that statement).

We had a picnic at the lake and tossed back both baguettes with brie, cured meats, hummus, and carrots. It looked a little something like this: 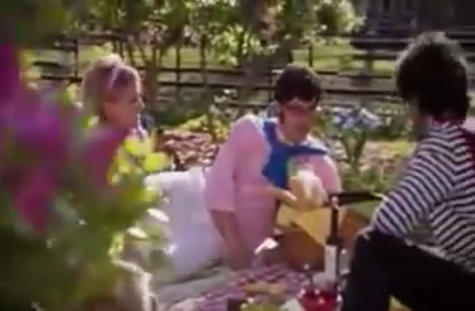