Sometimes, I feel like I’ve got bread all figured out. I pump out a massive loaf of sourdough weekly (note: the taste has improved since I originally blogged about it – gotta love a maturing starter) and I usually whip up some variation of a sandwich bread, too. Predictable, reliable, and always delicious.

But every now and again, a bread recipe comes along and totally humbles me. In this case, it was the Portuguese Sweet Bread. 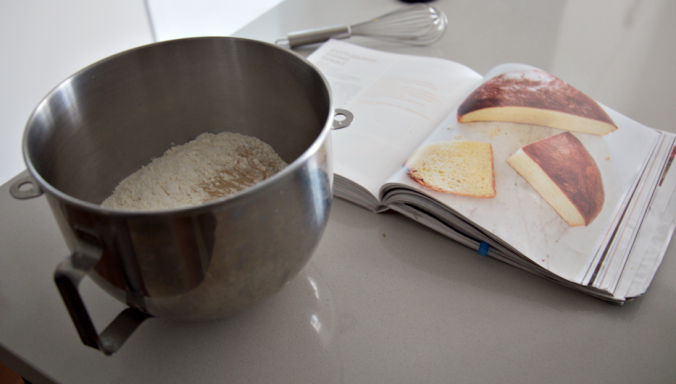 This bread looked simple enough – a big round loaf made in a cake tin – and it sounded like the perfect slightly sweet bread to enjoy lightly toasted with some blueberry jam. It’s a single day baking affair and I had all the ingredients on hand (flour, yeast, salt, water, eggs, sugar, vanilla, butter) – what could go wrong?

Plenty, as it turns out.

It started out just like any other bread. I whisked the dry together, I whisked the wet together, then I kneaded it all together in the stand mixer. Things started to go a little sour in step 2: adding the butter. As I added the butter bit by bit, the dough started to get really wet. The mixer was having trouble getting a “grip” on the dough – it was just kind of making a slapping sound and spinning the dough around without kneading it. I knew it would be a finicky dough (as evidenced by this caution in the recipe intro: “We do not recommend mixing this dough by hand”), so I kept stopping it and moving it around with my spatula to get the hook to catch the dough a little better. It worked – sort of – but the dough didn’t quite look like it was coming together. I left it in the mixer a little longer than recommended (about 4 minutes, rather than 3), but then I got worried I was over mixing it. 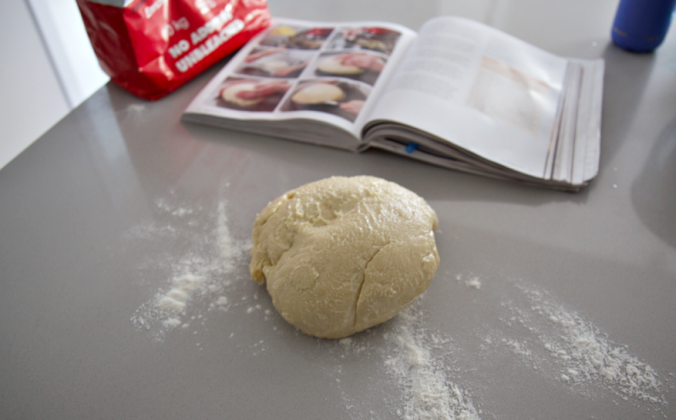 You can see how greasy the dough looks here. A buttery mess!

The next step was to knead it by hand for 30 seconds. I gave it a go, but the butter was getting everywhere. I know I used the right amount of butter – I even went by weight, not by volume – but I had to add a little flour so that I could actually get a hold of the bread and knead it. If I’m being perfectly honest, I added quite a bit of flour – maybe an extra quarter cup. 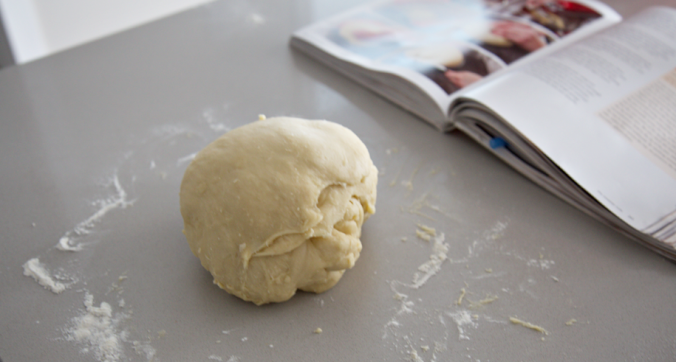 This is not what a smooth ball looks like.

Finally, the dough was workable and resembled the texture of the dough in the photograph. The problem now was that I couldn’t get a perfect smooth ball of dough. The dough tore as I tried to form the ball and the seam on the bottom gaped open, no matter how much I pressed it together. I even tried wetting it a little, but no dice.

I decided to ignore it and hope everything would sort itself out. I left the ball of dough to rise. 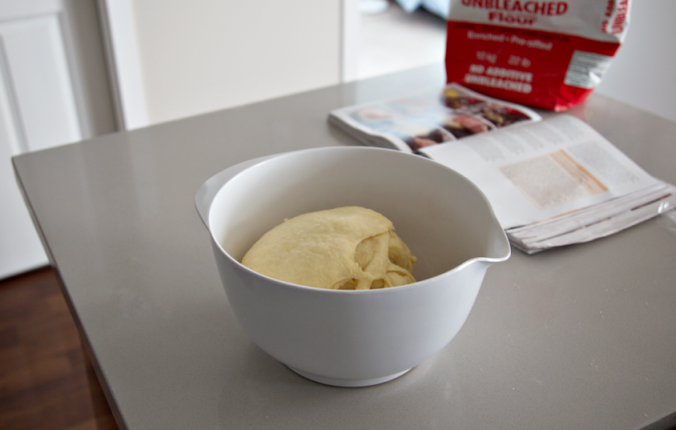 As it turns out, the tears didn’t magically seal themselves while rising. Huh.

When it came time to flatten the dough and make it into another ball, I had the same issue. The dough just wasn’t cooperating with me, and I think it’s because of the extra flour. At this point, you’re supposed to be place the ball – [gaping] seam side down – into a greased nine inch cake pan. This is what it says: “Place loaf seam side down in prepared pan. Cover loosely with greased plastic…”. It does NOT say (as it usually does) to gently press the dough down so that it fits snugly in the pan. My ball of dough did not touch the edges of the pan, but I hoped leaving it to rise for a second time might just make it naturally puff outward as well as upward. 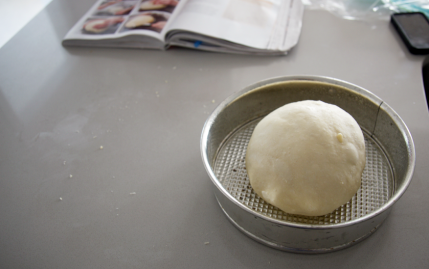 It did – a little – but not enough to fill the pan entirely. I just let it be. 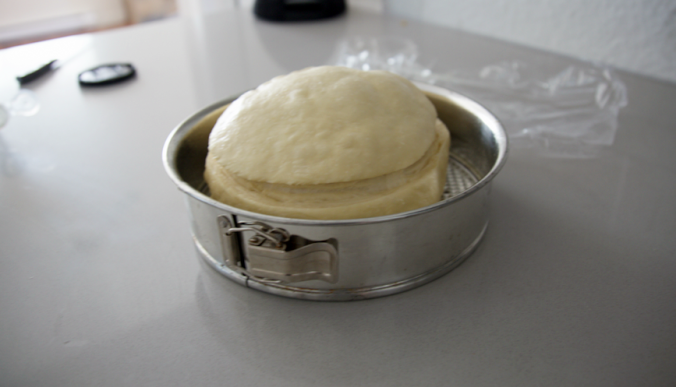 Before popping it into the oven, you’re supposed to score the circumference of the dough 1/4 inch deep. I think I scored mine a little too aggressively – more like half an inch.

These are all little mistakes, but they’re starting to add up. 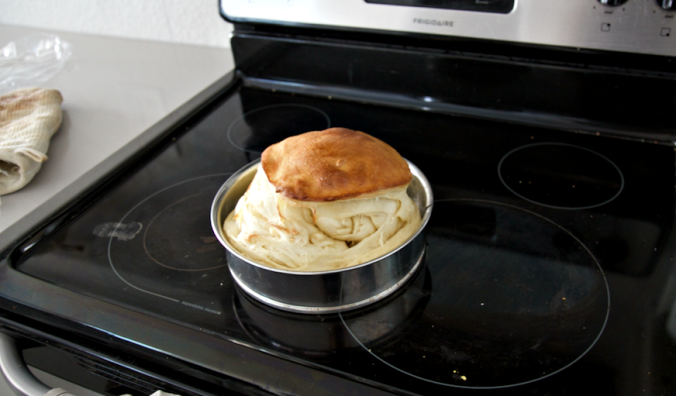 This is what it looked like when I rotated the pan only halfway through baking.

The directions are to bake for 30 to 35 minutes until the loaf registers 190 to 195 degrees. A check at 30 minutes yielded a temperature of like, 110. I left the bread in for another 10 minutes, but the top was starting to look very dark – minutes away from being burnt. I took it out of the oven. 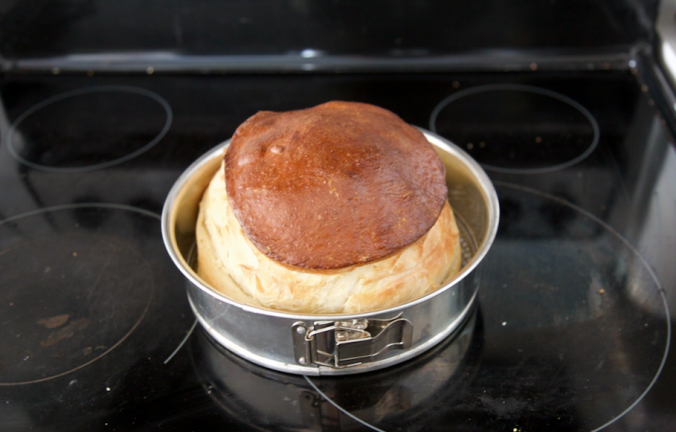 Suddenly, I heard Paul Hollywood’s voice in my head, warning Martha (one of my favourite contestants of the Great British Bake Off) that using egg wash on a loaf can make it appear done before it really is. Yup – I fell victim to the too dark loaf exterior. The middle was RAW. 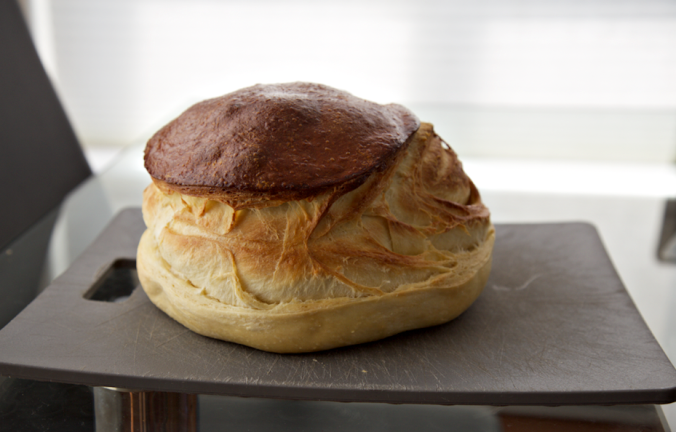 The loaf also looked like a disaster, but that was the least of my problems. My score had resulted in a muffin top of sorts. I sliced an outside piece of the bread. It was a little ugly, but pretty tasty – a little sweet, but not over the top. As I approached the centre of the loaf, the raw interior became exposed. Again – visions of Paul Hollywood shaking his head with disapproval. 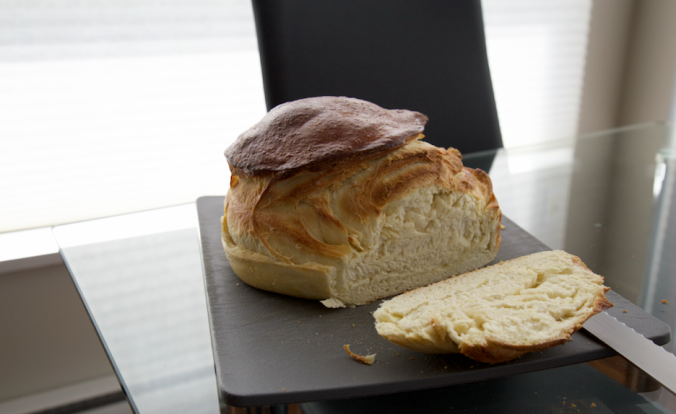 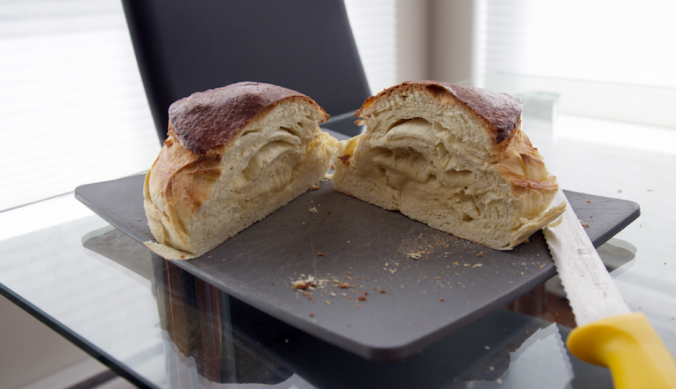 Cedric and I nibbled at the outer perimeter of the loaf, but I accidentally left it out overnight (partly butchered) and it was dried out by morning. Into the bin it went.