We are lucky to have some pretty phenomenal landscapes in Canada, but the Rocky Mountains has to be one of my all-time favourites.

Even though I live among the Coastal Mountains of BC – and I love them, truly – there’s something about the Rockies that humbles me every time I see them. I was very excited to visit them in Banff on the 12th leg of our trip of outdoor exploration across Canada.

We arrived in Banff right around Labour Day, fresh from an 8-day canoe trip along the Mackenzie River in the Northwest Territories – and we’d stumbled our way right into winter. It was seriously cold, and I won’t lie – I was exhausted from our previous leg.

Arriving in Alberta also meant that we were nearing the end of our five-month journey. Half of me wanted to squeeze every outdoorsy moment out of this trip, since I knew it wouldn’t last forever. The other half of me sorely missed my warm, comfortable bed.

And so, our time in Banff was kind of a hybrid between outdoorsy and not. If you’ve ever been to Banff, you’ll know that if you stay by the town centre – as we did (in a campground, at least) – it’s hard to feel like you’re truly “out there”. It is pretty touristy and there are lots of shops, restaurants, hotels, and even a movie theatre. (We may have gone to see Straight Outta Compton – that’s the not-so-outdoorsy part.)

We toured the eternally busy Johnston Canyon (when in Rome, right?), then attempted a more challenging hike up Mount Bourgeau. It felt weird crossing through gates at the trail head – the gates are to keep grizzlies and other critters off the highway and main populated area, so when you cross them, you’re leaving your safe(ish) little bubble and entering no man’s land.

The first part of the hike was no harder than many of the hikes I’ve done in BC, but man, I felt winded! I couldn’t determine if it was the elevation (we’re not a sea level anymore, Dorothy!) or just the fact that most of the hikes I’d been doing that summer had been pretty flat and not, you know, scrambling up a mountain.

We passed Bourgeau Lake and continued to head up. Now, things were getting more exposed – and stormy conditions were a-brewing. Clouds were rolling in and we were getting socked in. It rained. It hailed. It even snowed!

We continued onward and upward until I couldn’t feel my hands anymore (remember – Raynauds!), and then we assessed our situation. Cedric was steadily on the “let’s get to the summit!” train, but I thought the weather was making things sketchier than we were probably prepared to face. Eventually, I convinced him that the dense fog meant we wouldn’t have any views even if we made it to the summit, so we turned back and made our way back down.

We had been leapfrogging with another couple on the way up, but lost them after we turned around. Shortly after we arrived back at the parking lot, they popped out. They, too, had turned around – they told us they had visions of being a headline: “Dumb Tourists Fall Off Side of Cliff in Fog”. I laughed – and very much related to the sentiment.

Nights weren’t great. The campsite was busy (being Labour Day weekend), so it was hard to feel like we were truly “out there”, as we had been in the NWT. Plus, the temperatures dipped well below zero. There was a lot of tossing and turning and it was hard to feel enthusiastic at all times, if I’m being perfectly honest.

However, it was VERY easy to feel enthusiastic about one particular adventure: HORSEBACK RIDING!

We were both very green to the sport (activity? sport? what is it at this level?) of horseback riding. I had memories of riding a horse in a circle outside the IGA – can that be right? Was there such thing as horses in grocery store parking lots when I was little? I also vaguely remembered riding a horse named Raisin at my cousin’s stables around the age of 7. Nonetheless, we had been signed up for a full day of horseback riding in the Banff backcountry – and we were STOKED!

Our horses were amazing. I had a fella named Caesar, and he was sassy and perfect. Cedric rode a horse named Possum. Possum was fantastic – he had to stay in the back of the pack because he annoyed other horses. Caesar was the only horse who could tolerate Possum, so I rode ahead of Cedric. When Possum would get too close to Caesar, Caesar would just swiftly kick him.

Shortly after we left for the trails, we were reminded that horses are actual beings, not just methods of transportation. Here’s what happened: a trail runner came up from behind and spooked Possum, who was at the back. Possum took off at full sprint (gallop? canter?!?!), Cedric hanging on for dear life. Possum’s freak out, in turn, startled Caesar, who also took off running. Thankfully, I held on tight as we passed the three horses ahead of us, and eventually Caesar and Possum chilled out. I was very weary of sudden noises and movements after that, but we didn’t have any more excitement of that genre.

Here’s one kind of excitement we did have: WOLVES! Thus far into our Woods Canada adventures, we’d seen bears, moose, deer, porcupines, porpoises, and even a whale – but no wolves. A way’s down the path ahead of us, we spotted a wolf and her pup before they tucked into the woods. They looked a lot like huskies from where we stood. In hindsight, it is kind of sad that we saw them, because there has been a lot of conflict in Banff with wolves, making it not so safe for them to be around. It’s kind of like bears in Whistler – they’re just chilling in their habitat and checking out the treats the people are leaving behind, but by being so close to people, they’re putting themselves in danger.

Possum and Caesar had no problem navigating the terrain, even the steep and muddy bits and river crossings. The most nerve-wracking part was right at the end, when we walked them by the Fairmont and there were cars and buses and people everywhere. I was worried that the beep-beep-beep of a bus backing up would startle the horses, but we made it back in one piece. 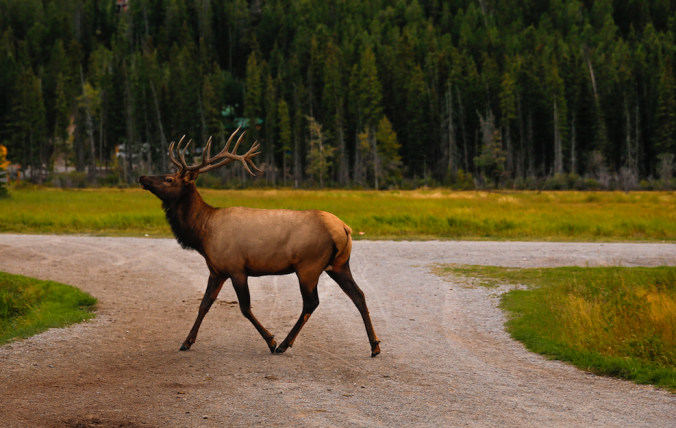 Earlier in the day, our guide had mentioned that it was rutting season for the elk, and that one male had been making a regular appearance late afternoon around their stables. We hung around (from the safety of our car – you do not want to mess with an elk in rutting season) and indeed, out he came, kicking up grass with his antlers and stomping around. He was on the cover of our Christmas card that year. 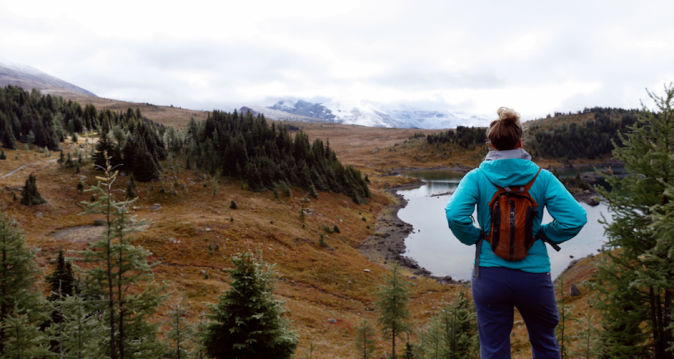 Our time in Banff was more about micro adventures than one big one. It included hikes, wildlife, horseback rides, alpine explorations, waterfalls, a couple of trips to the movies, and yes – a trip to the Grizzly Paw brewery in Canmore (which also serves CRAFT SODA – a dream come true for me!). Leaving Alberta was bittersweet – on the one hand, it meant our adventure was coming to an end. On the other hand, it meant that I was getting closer to a night in my own bed and a FRESH CHANGE OF CLOTHES (I had been wearing the same two or three tops and bottoms on repeat for nearly five months).

But the trip wasn’t over yet – we still had a couple of legs in our own neck of the woods to cap things off. Stories to come… some day…

One thought on “Woods Explorer Stories: Banff and the Canadian Rocky Mountains”