Oh, my poor blog! I have woefully neglected this thing and truthfully, I don’t have plans (or time) to resuscitate it any time soon. It turns out that balancing a new baby, a job, a relationship, many friendships, hobbies, fitness, and a household is a lot of work. Maybe one day I will bring it back – but in the meantime, I have a number of old posts that I wrote but never posted that I shall schedule for the coming days. I hope the archives help people down the road who are keen on reading a recipe review or a race recap.

Fun fact: I made this recipe TWO YEARS AGO. I wrote the draft for this post ages ago but wanted to wait til the holidays to post it. Then, I forgot all about it.

I have tried various knock-offs of the Williams Sonoma bark, but most taste kind of stale, with candy cane that feels too chewy rather than nice and crunchy. The best alternative at a reasonable price (about $10 USD) I have found is the Trader Joe’s version – it’s worth the cross-border trip.

As I snacked my way through the Trader Joe’s tin, I had the thought that every baker has when they’re eating something delicious: “How can I make this?” Peppermint bark seems easy enough, so I decided to tackle it myself without a recipe.

First up, the crushed candy cane. I had a bunch of candy canes – my challenge was now to smash them down to teeny tiny pieces while minimizing the amount of effort and mess involved. Cue the food processor.

Unwrapping the individual candy canes was a bit of a static-y mess, but it was smooth sailing afterwards. I only had to pulse the candy canes a few times to get them to a satisfying crumble. 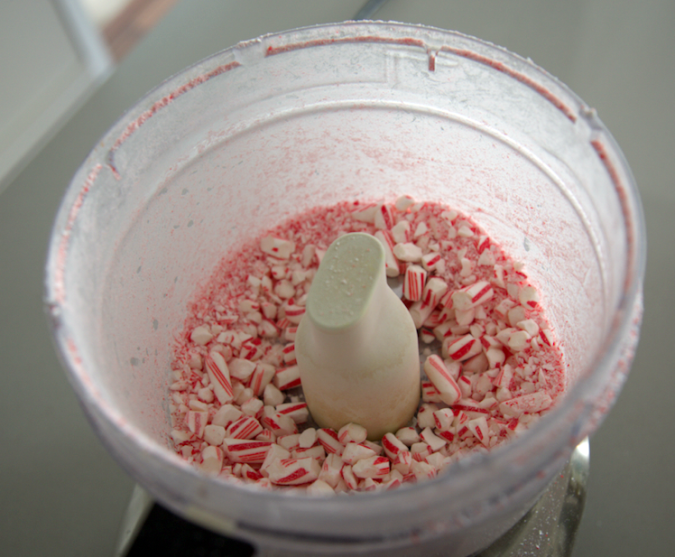 Inevitably, my crushing produced a fair bit of fine candy cane dust. That wouldn’t have quite the right look on my crumble, so I sifted it out and later stirred it into my chocolate for a bonus peppermint touch.

I couldn’t find white chocolate in large quantities, so I decided that my version of candy cane bark would consist of a dark chocolate layer and a milk chocolate layer rather than the traditional dark and white layers. 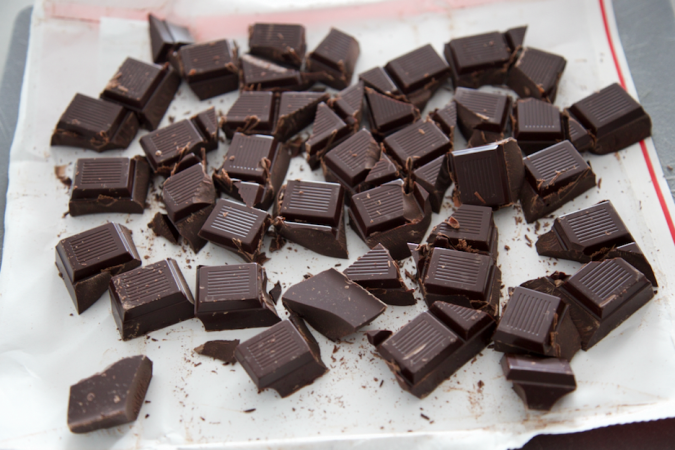 I chopped up 500g of dark chocolate, then put about 80% of it into my homemade bain marie (my aluminum mixing bowl hovering over – not in – a shallow pot of simmering water).

When the chocolate was melted, I removed it from the heat and stirred in the remaining solid chocolate that I’d left behind, piece by piece. I took a chocolate course many moons ago, but it’s been a long time since I’ve had to temper chocolate. (As it turns out, I didn’t quite nail it – my chocolate developed that telltale chalk-ish colour over time. But hey – it still tasted good.)

I spread my chocolate out on a parchment-line cookie sheet (much like I did in my English Toffee post), then left it to harden. I then repeated the process with the milk chocolate layer. 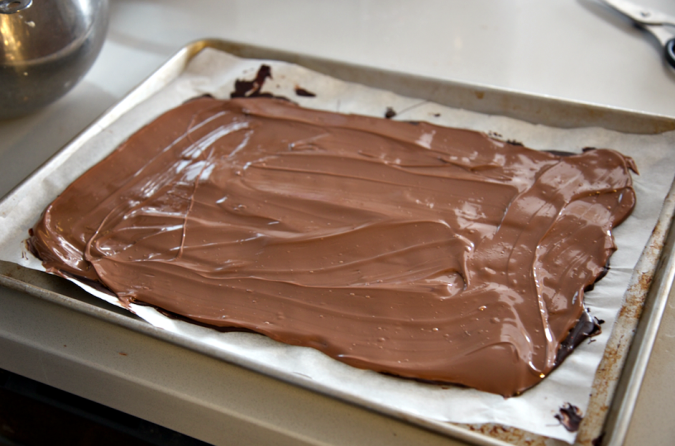 After spreading the milk chocolate over the now-solid dark chocolate layer, I sprinkled the crushed candy cane over the mixture to set. I had lots of candy cane, so I used a “the more the merrier” approach. It is, after all, Christmas.

My last step was to melt a bit more dark chocolate and drizzle it over the slabs of chocolatey candy cane goodness.

After the whole she-bang had a chance to set, I chopped it into somewhat irregularly shaped chunks and placed the pieces into cellophane bags, tied with a ribbon. I put the bags into a big Ziploc freezer bag and sealed them up until I was ready to distribute them at Christmas. They were a little worse for wear after a cross-country plane trip, but you know what?